Are The Houses In Colorado Springs Still There?

This keeps coming up and so I want to address it in its own post so that there isn't any confusion. The Burnham and Wayne houses were torn down by the landlord in early 1912. They aren't there any more. The address didn't change. They are gone and have been for over 100 years. The people who keep getting bothered by others coming by DO NOT live in the Burnham home. There isn't any confusion on this. The houses are GONE. Leave whomever lives in the house in Colorado Springs alone. The only people who are confused by this whole thing are people who refuse to believe history or listen to me. The picture on the right is the Google Street view of the corner in question. As I noted in the screen grab, the house pictured is not the Burnham house. The entire neighborhood is over 100 years old. All of the houses surrounding this corner were standing in 1911.  The old grocery store is there. The house Mrs. Brown lived in is still there. The Evans' house is still there. But the house Arthur Burnham rented and the house that Henry Wayne rented are not there any more. However, the empty space they occupied is still there. If the owners of the house with the arrow over it believe there was an axe murder in their house, it's because they have been convinced there was by people who think they know better. There wasn't. 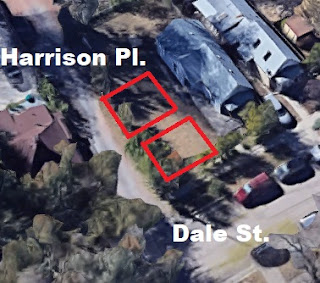 The screen grab at the left is the 3D view of the same corner. The red boxes represent approximately where the Burnhams and Waynes were living at the time of the murders. The Burnham cottage faced Dale Street. The Wayne cottage faced Harrison Place. There was a bit more room between them. Now I know, "But Inspector, how do you know this?" Because it's documented. The Denver Library has a huge collection of historic maps of Colorado, including the Sanborn Fire Insurance Maps. What are those? From the Library of Congress "The Sanborn map collection consists of a uniform series of large-scale maps, dating from 1867 to the present and depicting the commercial, industrial, and residential sections of some twelve thousand cities and towns in the United States." These maps are huge. The Denver Library has a special Map Room which is the only place you are allowed to view the maps. You have to wear linen gloves and the only way to make a copy is with a camera without a flash. You also aren't allowed to touch the table the maps are set on lest the oil from your skin transfer to the table top. The Sanborn maps were updated every year.

The picture on the right is my photograph, tightly cropped, of the 1912 Sanborn map of Colorado Springs. This is the corner in question. Dale Street is on the top and Harrison Place is down the right. You can see the house number listed along Dale Street for the Burnham House...and no building corresponding with the number 321. If you look really close though, you can see the faint outline of the Burnham cottage through the paper overlay. The Wayne cottage faced Harrison Place along the bottom of the square.  Hopefully this post puts the issue to rest.

Once more, though, for the record, the Burnham and Wayne cottages were torn down 107 years ago. If you want to visit something, visit their graves at the Evergreen Cemetery and leave the folks in 323 alone. 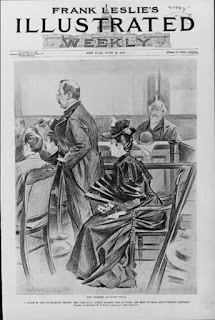 The other night I caught a show on the channel-that-formerly-covered-travel-but-now-is-all-about-paranormal-stuff...channel. Legend Hunter: Lizzie Borden innocent? (pay to watch) is kind of a wannabe Destination Truth and Expedition Unknown, crossed with Ghost Hunters and Finding Bigfoot. The first two shows I heartily endorse simply for the fun factor. The next two are...whatever. However, back to Legend Hunter. The premise of this episode was that host, Pat Spain, read The Man From The Train, saw the brief blurb about Lizzie Borden, then ran with it. Basically, Spain really, really, really wants to believe that Lizzie was just misunderstood and was innocent. First, Spain attempts to debunk some already established facts (i.e. Emma Borden's alibi) and fails.  He then tries to prove a serial killer could have been responsible for the murders of the Bordens. He specifically brings up Villisca! Although he never gets around to the "real" connection between the Borden murders and Villisca.  The show is essentially 45 minutes of Spain proposing alternate hypotheses in order to absolve Ms. Borden and swing the case to focus on anyone else. Particularly, a serial killer.

It basically boils down to the following:

Spain: I think this is what happened. Let's ask some experts!
Expert #1: Yeah, that's not at all likely.
Expert #2: No. Probably not.
Expert #3: lol no
Spain: I'm not convinced.

Now to be fair to Pat, in his closing monologue, he finally admits defeat and acknowledges that his desire for Lizzie to be misunderstood was hard for him to overcome. The problem is, his "confession" at the end of the episode makes up roughly two minutes of of a 45 minute show. And he is still rather ambiguous about whether or not he believes Lizzie was the killer (she WAS!). Now I'm not mad about anything; the show was interesting and I'm glad he brought in actual criminal investigators to debunk things. But, man, why are we even discussing the possibility that a serial killer did this? Lizzie Borden obviously did it. She was the only one with means, motive, and opportunity. Serial killers don't kill one person in a house, then hide from other people in the house for an hour and a half, then kill another person before running off. And why is anyone comparing this case to Villisca?
Posted by Inspector Winship at 8/04/2019 08:04:00 AM 2 comments:

Geographic profiling is a relatively new (1996) tool in the serial crime investigation toolbox. There are MANY different variables that can be inputted into the various mathematical formulas and the more data points you can enter then, hypothetically, the more accurate the profile will be. In short, the formula helps to narrow down the possible location of a "base" for a serial offender. The formula utilizes data such as the crime scene location, dump site (if any), proximity to and types of transit available, locations where weapons might have been obtained, and possible locations where the offender might have picked their victim. It's very in depth but it's still just a tool. Like psychological profiling, geographic profiling cannot solve crimes by itself. But it has proven quite useful in maximizing resources for search areas. Can this tool be used to help identify a suspect for the Axe Murders? The map at the right utilizes Kim Rossmo's formula for geographic profiling. The map shows the geographic profile of Dennis Radar (BTK). The area in red is the predicted base of Radar and lays on top of the College Hill neighborhood of Wichita. The problem with geographic profiling becomes evident here. Radar lived in the north, in Park City, and was mobile. He would park his car away from the crime scene, then walk to and from the victims' houses. In four cases, he drove the victim's car back to his own vehicle. Radar also stated that he "trolled" for victims just by walking around places. I believe only one of his victims was within walking distance of his house. Radar's house didn't necessarily need to be considered his base. Four of his seven crimes occurred between 1974 and 1979, when he was attending Wichita State. Wichita State falls in a fairly cool spot on the search zone and is roughly two and a half miles from the College Hill neighborhood and roughly 9 miles away from his actual house.

Colorado Springs and Monmouth: One Clue To Link Them Both!

"Oly" in the comments on this old post has provided a very good and plausible hypothesis regarding the flashlight found behind the Dawson's house in Monmouth, Illinois. For those of you that didn't take the time to check the other article, here's the key takeaway:

Ten yeas ago (holy crap) I spent a little time trying to find the significance of September 4, 1911 in Colorado Springs. I quickly filed it under "Get To Later" and was distracted by other shiny things. Thank goodness for readers! Oly may have found the definitive evidence linking the Burnham-Wayne murders to the Dawson murders. A Labor Day picnic in Colorado Springs! Hosted, in part, by the Modern Woodmen of America! On the date reported to have been scratched into the side of the flashlight! I'm extremely excited by this!

Ardenwald: Details That Cannot Be Ignored

It had been a week's worth of festivities and celebration with visitors flooding in from all over the Pacific Northwest. The 5th Annual Portland Rose Festival was in full swing and the major event of June 9, 1911 was the Decorated Horse and Buggy parade to be followed by the Military parade that evening. On that peaceful morning, as the parade route was prepared along Grand Avenue, it was Sarah Matthews, the neighbor of the Hills', who noticed the stillness of the Hill cabin. She often visited Ruth Hill in the mornings and William Hill was usually up and around by 5:30 a.m. With rambunctious kids in a small cabin a quiet morning was notably rare. Entrance into the cabin was through the back door, which dropped her into the north room of the house. The house itself was a two room affair. The north room being the kitchen and dining/living area and the south room being where Ruth and William slept. In this room were built small partitions to give some privacy to the family. The largest section of the room was where William and Ruth slept. Also inside of this section was a smaller partitioned area where Phillip was sleeping. In the living area, on the sofa, is where Dorothy slept. Near her was a table and on this table was a new clock, purchased a few weeks prior to the murders. The house was dark; the windows were covered by clothing and pieces of cloth. Even in the dark, Mrs. Mathews could see a form under the blankets on the sofa. Dorothy's feet were the only part of the girl's body not covered. Sarah Mathews went in to check if Dorothy was okay then she saw the axe resting against the sofa. She then looked into the parent's room and saw only a form on the bed. Sarah went back to her house, where she and her husband lived, next door to her son and his wife. She informed her family that that Dorothy was dead.

Dr. Epperly's book on the Villisca crime is scheduled for release in 2015! Here is an interview he did back in 2012. Enjoy!

The Story of the Midwest Axe Murders

In 1911 and 1912, entire families were destroyed by a silent fiend wielding an axe. Whole branches of family trees were sawed off and many of these people were forgotten. This is an attempt to memorialize those who were tragically killed.

Inspector Winship
I have a degree in Anthropology. I am a history buff who is particularly interested in historic crimes. I stumbled on the subject of the Midwest Axe murders entirely by accident and have obsessed about them ever since.

Get this Recent Comments Widget